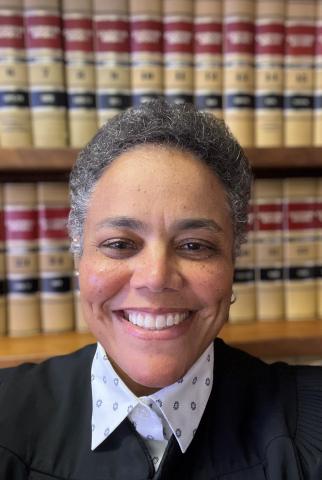 Justice Kelli M. Evans serves as an Associate Justice of the California Supreme Court. Before joining the Supreme Court, Justice Evans served as a Judge in the Alameda County Superior Court, presiding over both criminal and civil matters.

Prior to her appointment to the Alameda County bench, Justice Evans served as Chief Deputy Legal Affairs Secretary in the Office of Governor Newsom, where she advised the Governor and executive agencies on a variety of legal, policy, and legislative issues.

Justice Evans previously served as Special Assistant to the Attorney General at the California Department of Justice with a focus in criminal justice, public safety, and civil rights law and policy.

Justice Evans has had a career of public service. Before joining the California Department of Justice, she served as Senior Director for the Administration of Justice at the California State Bar. Prior to joining the State Bar, she was Associate Director of the ACLU of Northern California and served as a Senior Trial Attorney in the Civil Rights Division of the U.S. Department of Justice, and as an Assistant Public Defender at the Sacramento County Public Defender’s Office. Justice Evans also has served as a member of federal court-appointed monitoring teams for the Oakland and Cleveland Police Departments.

Justice Evans has sat on the governing boards of a number of non-profit organizations and currently serves on the California Commission on Access to Justice. She has received numerous awards and recognition including the King Hall Distinguished Alumna Award, the Stanford Trailblazer Award, Judge of the Year Award, Attorney General’s Award for Exceptional Service, State Bar President’s Award, and a Medal of Achievement from the Washington Metropolitan Police Department.

Justice Evans received her undergraduate degree from Stanford University and her law degree from the University of California at Davis, where she was the recipient of the Martin Luther King, Jr. Award for Public Service.